A mentor is not merely a wise teacher but a trusted supporter.

On Saturday, May 19th, at the book launching of “My Filipino Connection: The Philippines in Hollywood,” the new book by Philippine Inquirer 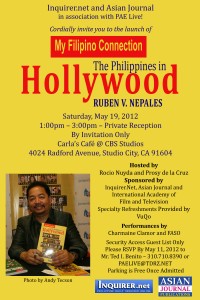 columnist Ruben V. Nepales, I was reminded of the vital importance of mentorship. The book profiles notable Filipinos in Hollywood – yours truly being on one of them. None of us would be where were at (or featured in “My Filipino Connection”) without our mentors.

Prosy Delacruz, a Los Angeles’ Fil-Am community leader, cited Mr. Fritz Friedman, Vice President of Sony, as one of her mentors in the community. I, too, have many mentors, and Ms. Prosy Delacruz is at the top of the list.

At my stage in life, I’m now being called a mentor. It’s such an important role, not only for the growth of the individual but for the advancement of our community. I’m proud to serve, and I thank all of my mentors for your wisdom, generosity and tremendous support.

This is a story that I have to share. Its lesson is something the I learned recently.

After 17 years of marriage, my wife wanted me to

take another woman out to dinner and a movie. She said, ‘I love you, but I know this other woman loves

you and would love to spend some time with you.’

The other woman that my wife wanted me to visit

was my MOTHER, who has been alone for 20 years,

but the demands of my work and my two boys had

made it possible to visit her only occasionally.

That night I called to invite her to go out for

dinner and a movie.

My mother is the type of woman who suspects that a

late night call or a surprise invitation is a sign

‘I thought it would be pleasant to spend some

time with you,’ I responded. ‘Just the two of us.’

She thought about it for a moment, and then said,

That Friday after work, as I drove over to pick her up I was a bit nervous. When I arrived at her

house, I noticed that she, too, seemed to be nervous

about our date. She waited in the door. She had curled her hair and was wearing the

dress that she had worn to celebrate her last

She smiled from a face that was as radiant as an

angel’s. ‘I told my friends that I was going to go

out with my son, and they were impressed,’ she said,

as she got into that new white van. ‘They can’t wait to hear about our date’.

We went to a restaurant that, although not

elegant, was very nice and cozy. My mother took my

arm as if she were the First Lady. After we sat

down, I had to read the menu. Her eyes could only

read large print. Half way through the entries, I

lifted my eyes and saw Mom sitting there staring at

me. A nostalgic smile was on her lips. ‘It was I

who used to have to read the menu when you were

small,’ she said. ‘Then it’s time that you relax and

let me return the favor,’ I responded.

During the dinner, we had an agreeable conversation- -nothing extraordinary but catching up

on recent events of each other’s life. We talked so

much that we missed the movie.

As we arrived at her house later, she said, ‘I’ll go out with you again, but only if you let me invite you.’ I agreed.

‘How was your dinner date ?’ asked my wife when I got home. ‘Very nice. Much more so than I could have imagined,’ I answered.

A few days later, my mother died of a massive

heart attack. It happened so suddenly that I didn’t

have a chance to do anything for her.

Some time later, I received an envelope with a

copy of a restaurant receipt from the same place

mother and I had dined. An attached note said: ‘I

paid this bill in advance. I wasn’t sure that I

could be there; but nevertheless, I paid for two plates – one for you and the other for your wife.

You will never know what that night meant for me. I love you, son..’

At that moment, I understood the importance of

saying in time: ‘I LOVE YOU’ and to give our loved

ones the time that they deserve.. Nothing in life is

more important than your family. Give them the time

they deserve, because these things cannot be put off

till ‘some other time.’

Somebody said it takes about six weeks to get back

to normal after you’ve had a baby….. somebody

doesn’t know that once you’re a mother, ‘normal’ is history.

Somebody said you learn how to be a mother by

Somebody said being a mother is boring ….

somebody never rode in a car driven by a teenager with a driver’s permit. Somebody said if you’re a’good’ mother, your child will ‘turn out good’…. somebody thinks a child comes with

directions and a guarantee.

Somebody said you don’t need an education to be a

Somebody said you can’t love the second child as

much as you love the first …. somebody doesn’t have two children.

Somebody said the hardest part of being a mother

is labor and delivery…. somebody never watched her ‘baby’ get on the bus for the first day of kindergarten … or on a plane headed for military ‘boot camp.’

Somebody said a mother can stop worrying after her

child gets married….somebody doesn’t know that

marriage adds a new son or daughter-in-law to a

Somebody said a mother’s job is done when her last child leaves home…… somebody never had grandchildren.

Somebody said your mother knows you love her, so

you don’t need to tell her…. somebody isn’t a mother. Pass this along to all the ‘mothers’ in your life

and to everyone who ever had a mother. This isn’t

just about being a mother; it’s about appreciating

the people in your life while you have them….no matter who that person is.

Growing up in a Filipino household, I was not accustomed to expressing my feelings. Filipinos are used to the gray areas, words left unspoken, assumptions left unchallenged. Eventually, after many years in America, I learned that sublimating your feelings and expressions is an ineffective way to live. The best way to communicate is simply to just say what you mean.

Now, I tell my parents "I LOVE YOU" whenever I feel like it. It wasn’t easy in the beginning, but after much practice, it’s become a healthy habit. It makes me feel good; it makes them feel great.

Though difficult at the start, I think telling it "how it is," whether expressing love or the contrary, or in your business dealings and social interactions, becomes easier after practice. And if my experience is any example, the practice is very much worth it.

One evening an old Cherokee Indian told his grandson about a battle that goes on inside people.

"My son, the battle is between the two wolves inside us all.

One wolf is Malicious- it is called the Destroyer.

It eats away at the marrow of our Self.

The second wolf is Good- it is called the Healer.

It enriches and nurtures our Being.

The grandson then asked his grandfather,