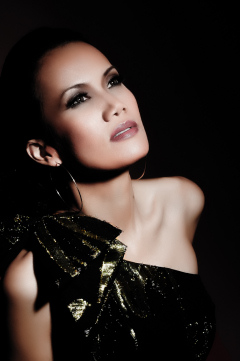 Celebrated by The New York Times as "a gifted vocalist" and by The Los Angeles Times as "one of the important and original new jazz singers of the decade," Filipino-American recording artist and cultural trailblazer Charmaine Clamor has earned her Queen of Jazzipino crown.

Charmaine's musical journey began at age 3, entertaining passengers -- whether they liked it or not! -- in the back of buses traveling to Manila. Originally from the provincial town of Subic-Zambales, Philippines, young Charmaine provided piano accompaniment while her mother sang kundiman (Filipino torch songs) and English-language classics. These childhood memories inspired Charmaine's enduring love of American music.

In 2011, while making her sixth-straight appearance at the Philippines International Jazz Festival, Charmaine gave a command performance at Manila's Malacanang Palace for United States Ambassador Harry Thomas and Benigno "Noynoy" Aquino III, President of the Philippines. President Aquino joined Charmaine onstage for a once-in-a-lifetime duet and declared her "a genuine source of Pilipino pride."

Creating, developing and mastering one musical genre has never been enough for the brilliantly eclectic Clamor [pronounced clah-MORE; rhymes with amour]. Her global recognition reached new heights in 2010 when Charmaine was the only Filipina to appear on the David Byrne/Fatboy Slim concept album, "Here Lies Love" (Nonesuch), about the life of Imelda Marcos. Charmaine was joined on the recording by luminaries such as Cyndi Lauper, Tori Amos, and Natalie Merchant.

In the liner notes of Something Good (FreeHam), Charmaine's 4th U.S. album, she declares, "I believe there are two kinds of music: the good stuff, and everything else." To Charmaine Clamor, the categories don't matter; the labels are irrelevant. Call her a Filipino-jazz-world-soul-pop-funk-blues singer. Call her the Queen of Jazzipino. When she shares her once-in-a-generation astonishingly expressive voice, genres fade away and beauty takes over. JazzTimes emphasized, "Clamor vocally resembles an amalgam of Nancy Wilson and Lena Horne, a sumptuously elegant blend of silk and satin, trimmed with gutsy self-possession."

After immigrating to the United States as a teenager, Charmaine graduated as valedictorian of her high school class and went on to earn a Masters Degree in Physical Therapy from Cal State-Northridge. Throughout her college years, Charmaine worked as a "KJ" (a karaoke hostess). During this time she was discovered by the musical director of Crescendo, a vocal jazz harmony quintet, while singing Whitney Houston songs at a Filipino fried chicken restaurant.

In 2005, following nearly a decade of ensemble singing, Charmaine made her solo recording debut with Searching for the Soul (FreeHam Records), and her "bedroom eyes voice" {All About Jazz} instantly garnered comparisons to legendary vocalists such as Nina Simone, Julie London, and Cassandra Wilson.

Charmaine's critically acclaimed second album, Flippin' Out (FreeHam Records; 2007), brought her international recognition. On this landmark recording, she introduced jazzipino, a new music style blending American jazz with music from her beloved home country. Charmaine's artistry was featured on BBC's "The World" and NPR's "Weekend Edition," which described her music as "the perfect bridge of two cultures."

Her third album, My Harana: A Filipino Serenade (2008), revived the ancient Filipino courtship tradition of harana - serenading a lover beneath her window - but with a twist: this time it was the woman doing the serenading! Charmaine's bold vision and sublime vocal tenderness solidified her role as her birth country's most celebrated international musical ambassador.

Through her presence on American radio and incessant touring from Alaska to Florida, Charmaine has been credited with introducing authentic Filipino musical culture to mainstream listeners. To further her lifelong goal of bringing the music of the Philippines to ever larger audiences, Charmaine serves as one of the founding members of JazzPhil-USA, a non-profit organization that promotes jazz artists of Filipino descent in the United States. For six consecutive years, she has lent her notoriety to the popular Filipino-American Jazz Festival, held annually in Hollywood, at the Catalina Bar & Grill Jazz Club, where Charmaine's appearances with fellow Filipino-American jazz stars inspire standing-room-only crowds.

In 2009, Charmaine was signed to a multi-record deal with Viva Records, one of the largest pop music labels in Asia. As Viva's first and only jazz artist, her debut album, appropriately entitled Jazzipino, brought Charmaine's unique sound to millions of new listeners on Filipino radio and television.

With three consecutive albums in the JazzWeek World Music Top-20, including the rare feat of simultaneously making Top-5 on both the World (#2 ranking) and Traditional Jazz (#4) radio charts, Charmaine has earned unprecedented praise for her cultural trailblazing. She is the first Filipina to headline America's top jazz venues, including Iridium (New York), Yoshi's (San Francisco), Regattabar (Boston), and Catalina Bar & Grill (Los Angeles).

Her many honors include the Asian Heritage Award in Performing Arts, Filipinas Entertainer of the Year, and recognition as one of the 100 Most Influential Filipinas in the United States.

But she won't rest until audiences feel her passion for all kinds of music --and for the blessed planet we inhabit. Charmaine is proudly "green," serving on the Sierra Club's Water Committee, and dedicating her song "Flow," the first single and music video from Something Good, to water advocacy organizations.

Charmaine lives in Southern California, where she tends to an organic vegetable garden, volunteers for environmentally responsible organizations, and works tirelessly at making something good.

Filipino Academy of Movie Arts and Sciences [the "Oscars" of the Philippines]
Award of Merit, "Philippine Pride Best Jazz Singer"